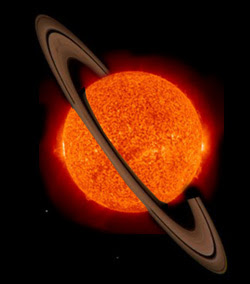 We will start our journey with the biggest planets in our Solar System: Jupiter and Saturn. They are huge - Jupiter is heavier than all the other planets in one place (and most of "the other planets'" mass is Saturn's). Can we find a use for them? But, wait a minute, I was talking about terraforming. You all know that these are gaseous giants, how can we settle those? Am I crazy?

Obviously we are not settling anything yet (some proposed enormous orbital habitats around them, but just forget this). Instead, we should use them for another purpose.

The first thing you notice when you read about them is that gas giants are not regular planets. Actually, seeing that celestial bodies are being classified and reclassified (with Pluto out of the first league), my opinion is that such objects should also be kicked out of the group, but promoted. They are made mostly of hydrogen, and a bit of helium. Yeap, like stars; they are at the lower end of the hydrogenous bodies category, with proper stars at one end (at least 75 times Jupiter's mass) and brown dwarfs in the middle (at least 13 Jupiters).

So, why aren't they lighting our skies as stars do? It's about their mass: you need a huge mass to press all the hydrogen in one place, break the Coulomb barrier, and trigger spontaneous nuclear fusion. Brown dwarfs can only fuse deuterium (they give a very, very dim light) and only a proper stars can fuse protonic hydrogen. But there is another thing that can trigger fusion: it's temperature, at least 35,000,000 K. Simply putting it, it's the principle that makes thermonuclear bombs work: they need a fission trigger to get hydrogen fused.

Let's make it clear: I do not support the Cassini conspiracy theory, with occult groups wanting to ignite Saturn with that probe. Nuclear power generators such as those aboard the probe are not bombs! What I'm saying is that, using the proper equipment, there is the possibility of igniting gas giant planets, and several people have thought of this.

I told you that in this website I propose means of colonizing the System using accessible technology, trying to avoid large scale SciFi engineering, or exotic solutions. M.Fogg suggested in an interesting article using blackholes for the purpose, but I believe that dealing with blackholes would be a task for future generations. I say: why shouldn't we try doing it by simply using two nukes (two probes carrying big thermonuclear warheads). I won't bother you with the calculations and details, I let you read my article.

Some doubt this idea would work, and it's possible they are right, since nobody tried this before. But I think It's worth sarcificing two H-bombs to give it a try.

So, we could turn Jupiter and Saturn into stars. They won't last forever, but certainly several millions of years before consuming their fuel. But what's the purpose? First, both giants have plenty of satellites, some of them are planet-sized, or at least Moon-sized, and interesting for a potential settlement. But for now, they are cold and dark, being too far away from the Sun to receive its radiation. But about Ganymede % Co.  we'll talk a bit later.

Furthermore, when a new star is born, it produces a huge ejecta (more than 10% of the initial mass) - a wave of hot, high-speed travelling ionized hydrogen wave (that's why, for stellification to be safe for us, we should only do it when Jupiter/Saturn is in conjunction with the Sun, for maximizing the distance and letting the Sun deflect the ejecta). But this ejecta should help us do another great thing, this time on Mars.

5. Van der Worp, J. - Could NASA use Galileo to create a Jovian Nagasaki?