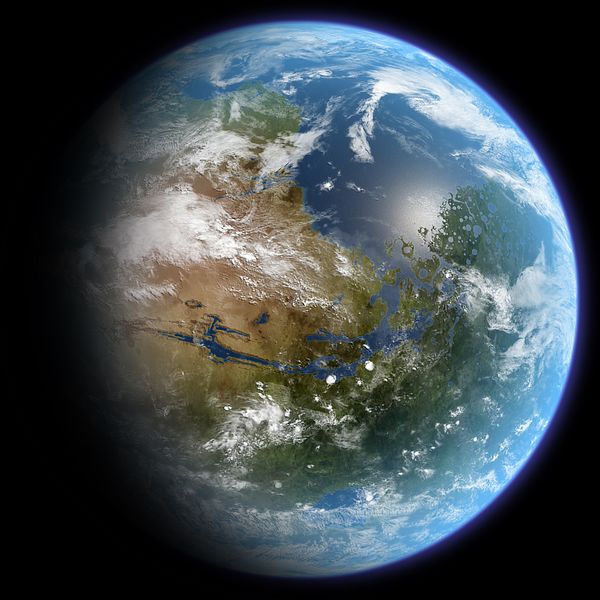 A picnic on Mars

And now, we'll go to Mars. There is quite a considerable amount of good literature written on terraforming our red, iron-rich neighbour. In the "References" section below, I will write down the papers and websites known to me, that concern our subject. For much more articles, see Fogg's Planetary Engineering Bibliography. Many of the articles are also available online, so if they don't have a link here, you may search them on the Net. Having this in mind, I'm not going to get into details, just tell you the principles behind the terraformation process. For deeper insights into this theories, see the references.

Look at the picture above! It's nice, isn't it? It could be Mars in a few centuries. Because that's what terraforming it's all about. Not domed colonies in/below a sterile landscape, but life all around the planet. It's about going to a picnic on the edges of Valles Marineris.

There are more and more evidences that Mars had liquid water on its surface (which also means a decent atmospheric pressure). It's half of Earth's diameter, receives a good amount of sunlight, and has 24:40-hour day. But at a moment in its distant past, things went terribly wrong. There are a few different theories about the causes, but the idea is that now Mars is going through an extreme ice age. The atmosphere froze up (that's the problem with having a mostly carbon dioxide atmosphere: it can easily be lost by freezing or by forming carbonate minerals). With a ridiculously thin atmosphere (0.8% of Earth atmospheric pressure), average temperatures are around -60ºC.

The good news are that the same way it happened, it could be reversed: by positive feedback. Shortly, data taken by various space probes show that there should be lots of volatiles (especially carbon dioxide) trapped in polar caps, permafrost, ice lenses in the regolith (martian "soil") and, possibly, carbonate deposits etc. Carbon dioxide is a greenhouse gas, so releasing sufficient amounts into the atmosphere would heat the planet, melting more carbonic ice and so on. Building an atmosphere also needs nitrogen. Scientists suspect there should be significant amounts either as underground ammonia deposits, either as nitrate minerals. If this isn't enough we could bring in ammonia-rich asteroids (using NERVA rocket engines).

So, basically, Mars just needs a little impulse, and will start transforming itself into a life-hospitable planet. Many researchers think that an artificial temperature raise of maybe as few as 4 degrees should do the thing. There are many different proposals regarding how to do this.

Building and placing giant mirrors in the planet's orbit (and concentrating the sunlight on carbonic ice deposits), underground nuclear explosions (to release greenhouse gases from minerals), nuclear-powered industrial plants that would produce strong greenhouse gases such as perfluorocarbons, harnessing underground geothermal waters, diverting asteroids or comets to the planet's surface etc. Or, even better, a combination of all these methods. Furthermore, there is another idea. Remember what I told you about stellifying Jupiter? The process would eject large amounts of hot, ionized hydrogen into space. Receiving this on Earth would likely cause some trouble. But on Mars, it would help. As I told you, the atmosphere on Mars is made of carbon dioxide. At high temperatures, carbon dioxide and hydrogen react, producing three things: heat, water vapor (a greenhouse gas) and black graphite (which would decrease the planet's albedo, absorbing more heat from the Sun). This would certainly help our purpose.

So, in a century or even less, Mars could have a decent atmospheric pressure, and a functional hydrosphere with rivers, lakes, seas, and even a boreal ocean. All of this could be done with our actual scientific and technological knowledge. Would this be the end. No, this is just ecopoiesis, making Mars ready for microbial life. The planet would have an atmosphere consisting of nitrogen (if all goes right and we find the necessary amounts) and carbon dioxide. Humans couldn't breathe there yet.

The next stage it's proper terraforming. It would use Earth organisms to convert the carbon dioxide to oxygen photosynthesis On how it should be done, I recommend you the articles written by J.M.Graham (see References). Shortly, it would be a process of ecological succession, starting with introducing hardy cyanobacteria and microalgae, and continuing with organisms that more complex, but less resistant to anoxia and cold. Think of descending a high mountain: on top you have ice and bare rocks, hosting only microorganisms, then you have the alpine tundra, with lichens and mosses, then grasslands and forests. It's quite the same on Mars: microbes colonize the water and regolith and start converting the atmosphere, then lichens go further and start creating soil, mosses build up tundras and peat bogs (and, in wetlands, hypoxia-tolerating aquatic angiosperms build up specific vegetation), then self-pollinating or anemophilic grasses create grasslands. Invertebrates and insect-pollinated plants should arrive when the carbon dioxide level is low enough. Vertebrates and human colonists would be the last. Mars would become our second homeland. Sounds good, isn't it?

Yes, but there is a trick: it takes a long time. Even the most optimistic estimates talk about around one thousand terrestrial years (with our current tech level; of course, if we manage to build "stargates" during this, things would change a bit) . So, that's the reason we should start the process as soon as possible. We need to be sure that there will still be a technological civilisation on Earth by then.

Of course, things would not end here. There are various causes (low gravity, no plate tectonics, no magnetosphere) that would require a constant human intervention in order to prevent biosphere deterioration on Mars. And we still need effective ways to move, fast and in large numbers, people form Earth to Mars, in order to make Mars a real demographic debouche (so, there was a reason for mentioning "stargates", but that's for quantum physicists). For more informations about terraforming, see the references below.

And then, you may ask the big question that this stage of the Big Plan poses: would this be enough? I mean, yes, we terraform and colonize Mars in a number of centuries, but would this be the solution to the demographic problem? Two planets are certainly better than one but at the time we could start the massive colonization of Mars, it won't be enough; we would need more additional living space. For this, the same principles we use for Mars should work on a very different group of celestial bodies, as you will see in the next chapter.

A picnic on Mars